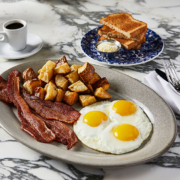 Café Americano is an all-day diner with an extensive breakfast menu, elaborate cocktail program, and late-night menu. American breakfast classics and comfort food with a Latin twist are served up for breakfast, lunch, and dinner daily. At the bar, mixologists craft barrel-aged classics and signature drinks for guests to savor. The Ocean Drive location will boast oceanfront terrace dining.

“What goes on in Vegas, doesn’t always stay in Vegas,” said Matias Pesce, CEO of V&E Restaurant Group. “Miami is just as nocturnal as the sin city, Los Angeles, or New York, and V&E Restaurant Group is excited to elevate not only the late night dining scene but South Beach’s breakfast offerings with two new Café Americano restaurants launching on Ocean Drive and Collins Avenue in Miami Beach. Whether you’ve got a hankering for a tiramisu waffle, Cuban sandwich, fish n chips, double bacon cheeseburger or kiwi matcha tea bowl, Café Americano has you covered with your favorite comfort food, cocktail or all-day breakfast dish.”

Café Americano Ocean Drive and Café Americano Collins Avenue are open for breakfast Sunday through Saturday from 7 to 11 a.m.; for lunch, dinner, and all-day breakfast Sunday through Saturday from 11 a.m. to 12 a.m. In compliance with COVID-19 guidelines, Cafe Americano will close at midnight nightly. For more information visit www.cafeamericano.com or follow @cafeamericanomb on Instagram. 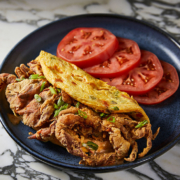 Café Americano, an all-day diner based in Las Vegas, has opened its first Miami-area location inside the Hotel Victor on Ocean Drive in South Beach.

The concept was created by Miami-based V&E Restaurant Group, which owns more than 30 restaurants in Mexico, Las Vegas, and Miami; including la Cervecería de Barrio, Mercato Della Pescheria, Marabu, and Cortadito. The latter, open since December 15, is located right off Lincoln Road in a spot previously occupied by David’s Café.

The Ocean Drive location is the third for the all-day restaurant and bar, which in Las Vegas is situated in the lobbies of Caesars Palace and Paris hotels. Classic American fare with a Latin twist is offered on the eatery’s breakfast, lunch, dinner, and late-night menus, along with a cocktail list.

In a phone conversation, Matias Pesce, CEO of V&E Restaurant Group, tells New Times that the group made the decision to proceed with the all-day diner project despite the current city curfew after they realized they could still make the numbers work.

“We understand that this pandemic is temporary,” says Pesce. “We opened our first location in Vegas in 2014, so we know how to develop and manage an all-day eatery. We also know Miami Beach’s clientele very well and the new spot is the perfect match of location and concept. People appreciate the mix of convenience and good food and that, combined with the outdoor atmosphere is what everyone is looking for now.”

Pesce notes that it is the breakfast menu that anchors the concept at all three locations, but the local menu doesn’t forego the diverse blend of culinary influences that defines Miami.

“We combine comfort food with unique signature recipes so our menu is made up of seventy percent base offerings and thirty percent items inspired by demographic; in this case, a Latin twist and regional dishes,” he explains.

Bloody mary aficionados can build their own version or choose a house-made option such as the Bloody Marisco, mixed with jalapeño- and cilantro-infused silver tequila and house bloody mary mix, topped with shrimp ceviche and a chili salt rim ($13). A Moscow mule ($13), a lychee martini ($13), are among the other classics listed on the all-day beverage menu.

A fourth Café Americano location is set to debut later this month in the Redbury South Beach on Collins Avenue, and Pesce says the group plans to keep expanding nationwide. An offshoot of the concept, Café Americano Xpresso, is likewise in the works.

“Much has changed in the food and beverage industry and landlords are demanding smaller locations,” says Pesce. “We’re developing a quick-service option with a reduced menu and more casual service over a 150-foot area and plan on opening in Brickell later this year.”